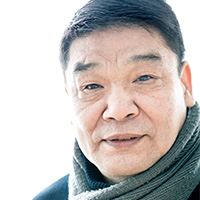 Jamie H.J. Guan began his training at age ten when he entered the Institute for Performing Arts in Beijing, China. Following his graduation eight years later, he was invited to join the Peking Opera Troupe No. 1 and performed with that prestigious group for fifteen years, specializing in martial arts warrior roles and touring internationally. He made his Broadway debut as actor and choreographer with David Henry Hwang’s Tony Award winning play M. Butterfly, and continued in those capacities with the London, Rome and Canadian productions and the American national tour. His choreography credits also include The Woman Warrior, F.O.B., Dragonwings, Last of the Suns, The Tempest, and Red. Mr. Guan choreographed and appeared in The Silver River at the Santa Fe Chamber Music Festival in 1997. In 1998, he was a movement consultant for the Broadway production of Tony-nominated Golden Child. Most recently he has worked with Debbie Allen. He has done Chinese martial arts choreography for Soul Possessed and Dream at The Kennedy Center in 2000, and he worked as Associate Choreographer for Crouching Tiger Hidden Dragon at the 73rd Annual Academy Awards in 2001. Mr. Guan choreographed for the Broadway production of Flower Drum Song in 2002, the Warner Brothers film adaptation of M. Butterfly in 1991, and Saving Face in 2003. He choreographed Red and M. Butterfly at Theaterworks Metropolitan Ensemble Theatre in 2004, 2006, and 2013, as well as Flower Drum Song at San Jose Musical Theater in 2008. He choreographed Romayana Musical and Indonesian Productions in 2010 and Blush’s Music Video “Warrior” in 2012. He is currently working on David Hwang’s new play Kung Fu, which will premiere at Signature Theater in 2014.