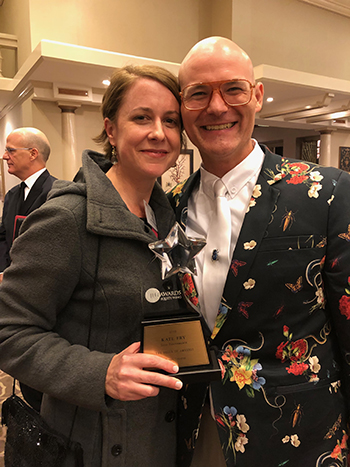 We wanted to learn more about what drew director Sean Graney (The Belle of Amherst, The Mystery of Irma Vep) to Agatha Christie’s famous murder mystery, so we sat down with him before a rehearsal to pick his brain.

Discussing his return to Court and Chicago, Graney shared that one impetus for pitching The Mousetrap to Artistic Director Charles Newell was the opportunity to work with actor Kate Fry (The Belle of Amherst) again.

“I think it’s a great role for her,” he shared, talking about the heroine at the center of The Mousetrap. “It’s a well-written role for a woman by a woman, and I thought that this piece would be a great fit for Court audiences.”

Fry is joined by an all-star cast including David Cerda, Allen Gilmore, Alex Goodrich, Erik Hellman, Tina Muñoz Pandya, Lyonel Reneau, and Carolyn Ann Hoerdemann. “I’m surprised at the depth of character development that the actors are bringing out,” Graney reflects. “I’ve always felt that the play is meaningful and relevant, but it’s still surprising to see just how deep the cast is delving into this world and the characters.”

That depth, in part, is thanks to Christie’s writing, which Graney describes as “deep,” “funny,” and “super-duper smart.” It’s also spurred on by Graney’s approach in the room.

“The Mousetrap is sort of dismissed as a frivolous mystery,” he explains. “But on top of the mystery, it tells a story about a bunch of people who are living lies and how the lies keep them from being able to connect to each other.”

While other productions foreground the play’s plot, Graney wants to do more than just tell a “really cool, well-crafted murder mystery.” Instead, he says, “what’s more important to me is this theme about lies keeping us in isolation. I’m not sure what themes are at the heart of other productions, but I’m telling a dramatic story with a mystery on top of it.”

What does he hope audiences will gain from his take on this classic piece of theatre?

“What an audience leaves with is whatever magnetizes in their brain while they’re experiencing this production,” he acknowledges. “Maybe people will try to be more truthful with each other. I hope they all have a good time.”

And with the cast and team he’s assembled, it’s no mystery whether or not audiences will enjoy this spirited take on an old favorite.

Agatha Christie’s The Mousetrap runs through February 16, 2020. Save your seats →