This summer, Court Theatre was honored to remount its production of Iphigenia in Aulis at the Getty Villa stage in Malibu, California. Each year, the Getty selects one classical tragedy or comedy to showcase in its dramatic Barbara and Lawrence Fleischman Theater, an outdoor venue modeled after ancient Greek and Roman amphitheaters. This invitation is one of the highest honors for theatres producing classical works, and was due in large part to the exceptional support of our audience. 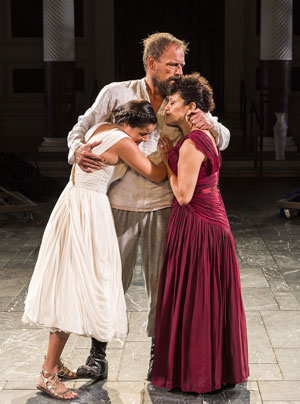 The reprisal of Iphigenia was not so much a remount as a new production—the same translation and team, but with a different set of questions and challenges. Over the course of a few weeks, an entire production—actors, management, and director, as well as necessary set pieces, costumes, and lights—was transported from Chicago to California. This particular production’s existence relied on the careful assembly of a multitude of puzzle pieces: the rebuilding of a design scheme, the rehearsal process in both Chicago and Los Angeles, and the adjustment from the intimate staging at Court to the more expansive Getty space.

This could not have been accomplished without the commitment of United Airlines in transporting everyone where they needed to go, the guidance and enthusiasm of the Getty Villa in navigating and facilitating the process, and the incredible support of Court’s audience, trustees, and donors.

Ellen Wiese, a member of University of Chicago’s Class of 2017, traveled with Court Theatre’s production of Iphigenia to the Getty Villa this summer. Her residence with the Court company in California and her work as Assistant Director to Charles Newell was made possible by the generous support of The College.