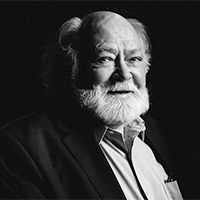 NICHOLAS RUDALL (1940 – 2018) was the Founding Artistic Director of Court Theatre, having led the theatre from 1971 to 1994. He led the growth of Court from a community theatre to a leading professional Equity theatre. In addition to his achievements as an actor and director, Rudall was a Professor Emeritus in Classics at the University of Chicago, where he taught for over forty years. His translations for the theatre—known for their stage-friendly language and “playability”—are myriad and span many languages, but he is best known for his translations of ancient Greek tragedy. From 2014 to 2016, Court produced three translations by Rudall—The Greek Cycle began with his Iphigenia in Aulis by Euripides, followed by the world premiere of Agamemnon by Aeschylus, and concluding in 2016 with Sophocles’ Electra. In 2017, Rudall accompanied the production of Iphigenia in Aulis to the Getty Villa in Los Angeles. That same year, Court Theatre established the Nicholas Rudall Endowed Fund to support the continued production of classical texts and to ensure that Rudall’s artistic legacy would endure.