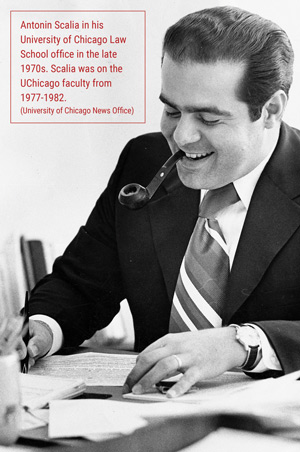 John Strand was the playwright in residence at Arena Stage in Washington, D.C. when his play, The Originalist, premiered in 2015. He is currently at work on the film version of The Originalist, as well as the new play, River of Doubt, about the life of Teddy Roosevelt. Nora Titone, Court Theatre’s Resident Dramaturg,  spoke with Strand to discover how he created a version of Justice Scalia for the stage, and what his motivation was for exploring this complex moment in America’s highest court.

You observed that “Nobody is neutral on the subject of late Supreme Court Justice Antonin Scalia.” What is it about him that evokes such passionate responses across the political spectrum?

One primary reason is that he was a puncher. He was pugilistic in his approach to what he believed and that really antagonized people who disagreed with him and caused people who agreed with him to stand on their feet and cheer. It was his nature to be controversial in public and we see that in his words from the bench. Part of what led me to first research Scalia was how vicious and vitriolic the comments were about him, not just as a Supreme Court Justice, but as an individual. But when I began to speak with people who worked with him and knew him well, he was this wonderful, paternal, humorous, brilliant individual. I thought there must be an interesting way to reconcile those two extremes.

By exploring Scalia’s character, did you hope there was going to be a collective lesson we could learn, or a political rift that could be healed? Or was it really just purely intellectual, to answer the question: how does he tick?

Many people join me in feeling alarm at the polarization of political discourse, if we can even dignify it with this term. I wanted to use Scalia as an example of someone who represents the extreme and see what it would be like to put him in the same ring with someone who is his polar opposite. We match him with a woman of color in her twenties, fresh out of law school, and what happens is that this pairing is not a mismatch: she learns how to punch. The historic Scalia was someone who welcomed debate from his clerks and made a point of hiring a liberal law clerk because it inspired heated debate. He loved that. But I think there’s an intellectual generosity in the idea that, ‘I don’t agree with you, but I will listen to you explain your condition respectfully and then I’ll answer you respectfully,’ and that’s how he treated the people around him. He was much tougher on his fellow justices. When they did something that he thought was wrong— that went against his own originalist interpretation of the Constitution—he could be vicious. You wouldn’t want to be on the wrong side of Antonin Scalia when he was reading a dissent to the bench. He frequently excoriated the other justices when he thought that they were violating the principles of the Constitution as he saw them.

Were there particular decisions of his from the bench that you had at the forefront of your mind as you were thinking about creating his portrait?

I went back and read all of his dissents. Scalia was a brilliant thinker and he had a comic timing that was really remarkable. He was funny from the bench, often to the chagrin of the people of opposing view. I think someone did a survey of how many times each justice solicited humor from fellow justices or the Court during a hearing and Scalia did so at a rate of about ten times that of any other. He knew how to deliver a line. There was a certain performer in Scalia, which is another thing that really interested me. He loved opera and he even appeared in a few operas as an extra. Scalia was a larger than life character and I think he really enjoyed that. He used the bench with its very theatrical setting, its costumes, and its lighting to perform. He performed from the bench.

The play was embraced in Washington by enthusiastics audiences during Scalia’s lifetime, and now is proliferating in a new way in a new political moment. What do you hope to see happen as people come to the theater now and watch this piece?

At the heart of the play is the idea that it is possible for two people of extremely divergent viewpoints to argue their case and at the same time not lose respect for one another and even, perhaps, gain respect for one another. The alternative is for us all to retreat into a kind of childish, reactionary, hateful response to people with whom we disagree politically. But here are two people who are extreme opposites of one another but have a certain amount of hope to move towards the other’s position. If you don’t have the respect to listen, research, and learn from an opposite viewpoint,  you’ll never be effective in arguing against it. So that’s the hope from this, I think. In the play they come to respect one another in a way that neither one of them would have anticipated.

And as you say there’s a historical basis in the life of Justice Scalia for that hopefulness.

You need only look at his most famous buddy sitting next to him on the bench, Justice Ginsburg. His positions may have driven her crazy from time to time but she loved him for his qualities as a person: his humor, the way he mentored his clerks— liberal or conservative—and the way he was a natural teacher. She has said that there are many times when she would submit one of her opinions to Scalia, asking him to read and comment on it. He was tough on her but she said that he made her argument better, stronger, more accurate. In reading her opinion, he probably disagreed with every line, but he took it seriously and worked to strengthen her argument. I think he greatly admired her courage and he saw how difficult it was for a woman in those days to advance in law and then rise all the way to the Supreme Court. I think he would begin from the position of: if you’re seated next to me on the bench, you’re a remarkable person and you are very talented in matters of law or you wouldn’t be here. If past that point you also happen to have a wonderful sense of humor and you’re just a real humanist and and intellectual, as is true of Justice Ginsburg, she had his respect. ■