Jacqueline Firkins, professor of Design and Production in Theatre and Film at the University of British Columbia, has been designing costumes for the House of Atreus since the beginning of Nicholas Rudall’s Greek Cycle at Court Theatre. Her creations for Iphigenia in Aulis, Agamemnon and now Electra tell a powerful story of their own, tracing the narrative arc of tragedy through subtle changes in fabric, color, draping and visual concept.  Firkins infuses her costumes with symbolic meaning, designing pieces that reveal fundamental truths about each character’s intentions, emotions and state of mind. The following excerpts from her design notebook offer insight into her imagination and the process by which she tells stories and signifies character through clothing.

In Electra, all the characters are struggling with memories of the past. Having established a visual vocabulary for each character in my costume designs for Iphigenia in Aulis and Agamemnon, I had a very literal background to draw upon when working on this production. We know what Electra’s father, Agamemnon, looked like when he died. We know what her sister Iphigenia looked like when she was sacrificed. Electra is haunted by her father’s murder and her sister’s death; she clings to her grief for them inconsolably. Agamemnon and Iphigenia are the ghosts who haunt this play, who incite the actions and emotions of the surviving characters, and they both are quite literally represented on stage. Electra wears a black, tattered version of the pristine white dress her sister was wearing when she was sacrificed to the gods. Atop this dress, Electra wears the very coat her father was wearing when he was murdered by his wife. Electra is torturing her mother by flaunting these emblematic garments, ensuring that the images of the dead cannot be neatly packed away. The images remain, like memories do, even when we least want to face them. 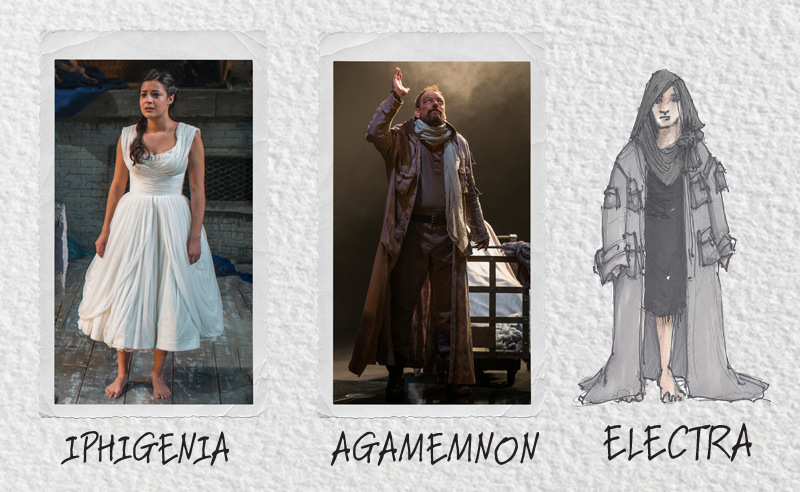 We have been referring to this trilogy of tragedies as the Clytemnestra Cycle because together, the plays encompass Clytemnestra’s transformation from a loving, doting mother to a mourning and vengeful queen, then ultimately to a paranoid and somewhat off-balance woman awaiting her violent fate. In Electra, Clytemnestra is now unhinged. Her first dress, in Iphigenia in Aulis, had a bold simplicity. She was a queen, but she was open, caring, in control. Her second dress, in Agamemon, began to twist and torque, a reflection of how Clytemnestra’s world was becoming more complicated. We started to shift into asymmetry and multiple fabrics in the design, to suggest that something was hiding inside Clytemnestra, barely being revealed but scrambling to emerge. Her third and final dress, in Electra, takes those ideas further. The asymmetry now is more noticeable. There are more textures and fabrics. The twisting detail is more complex. The material of her dress shows the impact of wear and weather. At a glance, she is still a woman with power, but that power, like her mind, is unraveling. The hints at Ancient Greek details and silhouettes in the costume give us a sense of glory and opulence. The texture and age and metallic accessories give us a sense of tarnish and deterioration. Clytemnestra is trying desperately to present a majestic image, but that image belies her mounting guilt and fear. 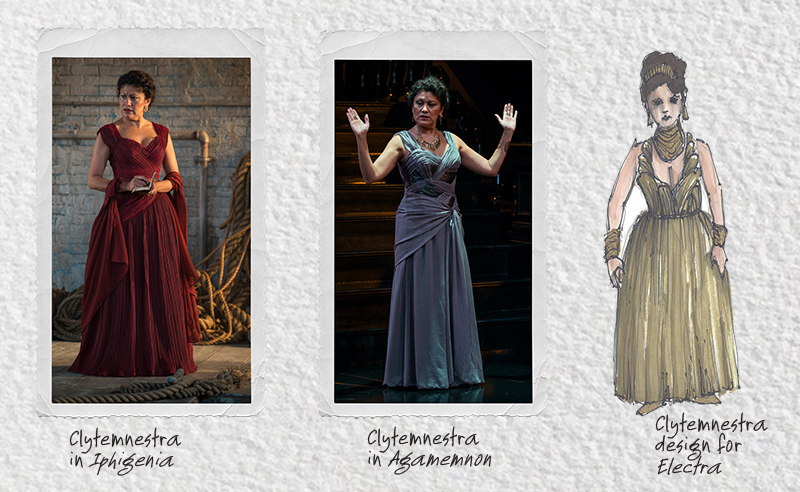 Posted on October 8, 2016 in Productions