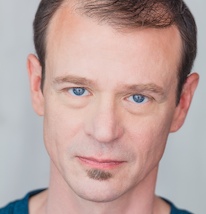 THOMAS J. COX gratefully returns to Court, where he last appeared in Electra and Man in the Ring. He has performed the role of Bob Cratchit in Goodman’s production of A Christmas Carol since 2018, as well as performing in Bernhardt/Hamlet, Blind Date, and Rock ‘n’ Roll (directed by Charles Newell). He is a founding ensemble member of Lookingglass Theatre Company, where he has performed in more than 40 productions. Other credits include: Writers Theatre, Northlight Theatre, Steppenwolf, Milwaukee Rep, The Gift Theatre, and The House Theatre. Film: Since You’ve Been Gone (Miramax). TV: Shining Girls, Chicago P.D., Chicago Fire, and Brotherhood.