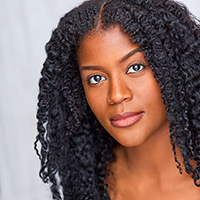 Kierra Bunch is thrilled to be back at Court after appearing King Hedley II (Jeff Nomination/Supporting Role). She was recently seen in Definition’s White and Windy City Playhouse’s Recipe for Disaster. She also appeared Windy City Playhouse’s Southern Gothic and Lookingglass’ Plantation. She’s had the honor of working with many other Chicago theatres including Urban Theater Company, Black Ensemble, and eta Creative Arts (Black Theater Alliance Nomination, Best New Actress, Best Performance in an Ensemble). She can currently be seen in a recurring role in South Side on HBO Max. Television includes Shameless, Chicago Med, and FOX’s Empire. She was a series regular on the Emmy Award-winning children’s show Green Screen Adventures. Kierra is very thankful for her family and friends who helped her embark on this journey. A special thank you to Gyton for his unmeasurable support. Kierra is represented by the wonderful team at Paonessa Talent Agency.