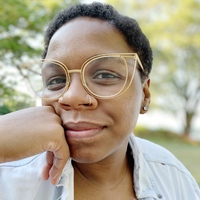 Gabrielle Randle-Bent (Co-Director) is a scholar and a dramaturg and director in Chicago. Her recent collaborations include co-directing Court Theatre’s production of The Tragedy of Othello, The Moor of Venice with Charles Newell and directing an adaptation of Eve L. Ewing’s 1919 for Steppenwolf for Young Adults. She also served as the dramaturg for Court’s productions of Guess Who’s Coming to Dinner, For Colored Girls Who Have Considered Suicide / When the Rainbow is Enuf, and The Oedipus Trilogy. Gabrielle is a co-founder of the Civic Actor’s Studio, a program of the University of Chicago’s Office of Civic Engagement. She was featured in American Theatre Magazine’s Role Call: People to Watch. She is a PhD candidate at Northwestern University.