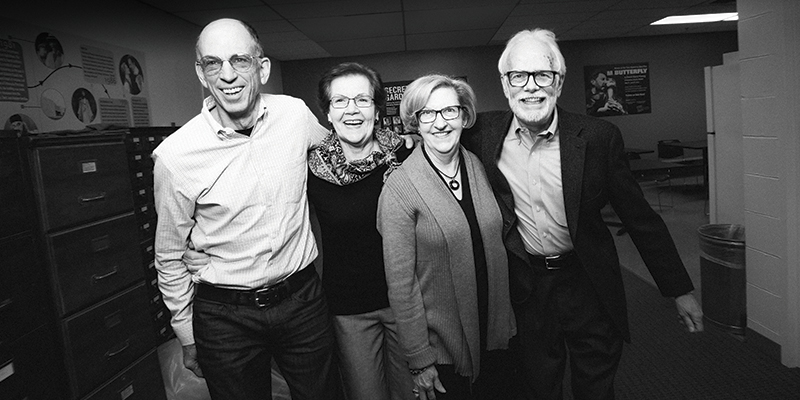 On a good day, the drive from Naperville to Court Theatre in Hyde Park takes an hour each way. But for several years, the Weils and Koveners have braved the traffic to see Court’s productions together.

Tom and Barbara Weil attended their first Court production, Arms and the Man in 1972, and have been devoted advocates ever since. For Tom and Barbara, “Court’s stage is a unique space where a variety of stimulating performances enhance our theatre experience.”

Gary and Sharon Kovener quickly became regular Court patrons after attending a Producers’ Circle event. Beyond the challenging, emotional work that is produced onstage, Gary and Sharon also appreciate Court’s engagement with the community, the University of Chicago, and the audience.

As members of the Producers’ Circle, Court’s premier giving society, the Weils and Koveners are fans of the exclusive members-only events at Court. These events allow them to follow the development of each production from First Rehearsal through Opening Night: “First Rehearsals and the Producers’ Circle Events have given us an insight into more dimensions of theatre productions.”

With so many years of Court Theatre to consider, the couples have many favorite moments and productions. Tom and Barbara particularly enjoyed Man in the Ring (2016) and The Year of Magical Thinking (2010). For Gary and Sharon, two behind-the-scenes moments that stand out are discovering the intricate set design in Blues for an Alabama Sky (2017) and exploring the themes of justice and vengeance in Electra (2016).

As fellow Court Producers’ Circle members and friends with a passion for theatre, the Weils’ and Koveners’ longstanding commitment to Court Theatre has grown. Even the commute doesn’t deter them: “Our Court adventure has provided a great opportunity to critique plays during our hour-long drive home!”

Court is grateful to the Weils, Koveners, and all donors for supporting theatre on Chicago’s South Side. ■

The Producers’ Circle is the premier giving society that provides you with exclusive access to the creative artists and inspiring scholars involved in Court productions. To learn more about the Producers’ Circle and become a member, contact Andrew Berg, Director of Development, at (773) 834-3305 or via email.