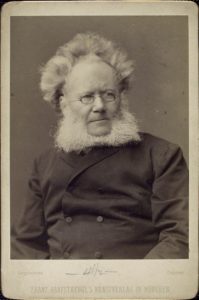 Henrik Ibsen was a Norwegian playwright in the 19th century who became well-known throughout the world for his significant influence on decades of authors and playwrights after him. Considered the father of realism, he holds a place in history as a founder of modernism in theatrical works. His plays, often considered quite controversial when published in the morally stringent 19th century, were and continue to be widely discussed beyond just an academic setting.

The Lady from the Sea was written in 1888, inspired by the Danish ballad Agnete og Havmanden. In the ballad, a young woman named Agnete meets a merman who rises from the sea and promptly offers a marriage between them. She goes with him, embarking on a domestic journey underneath the waves as she and her husband make a new family of seven children. However, one day she hears the church bells from above the water and decides to revisit her homeland. Upon returning, she decides to leave her underwater family forever and once again live on land. The tale is so famous that underwater artwork depicting Agnete’s abandoned family was installed in Denmark. Although Ibsen drew inspiration from it, the tale of Ellida Wangel is significantly different, yet just as enduring for its powerful motifs and a marked departure from Ibsen’s typical characterization. Motifs of free will, marriage, and the necessity of reconciling dreams with reality permeate the play and their presence ensures it remains startlingly relevant no matter the time period. 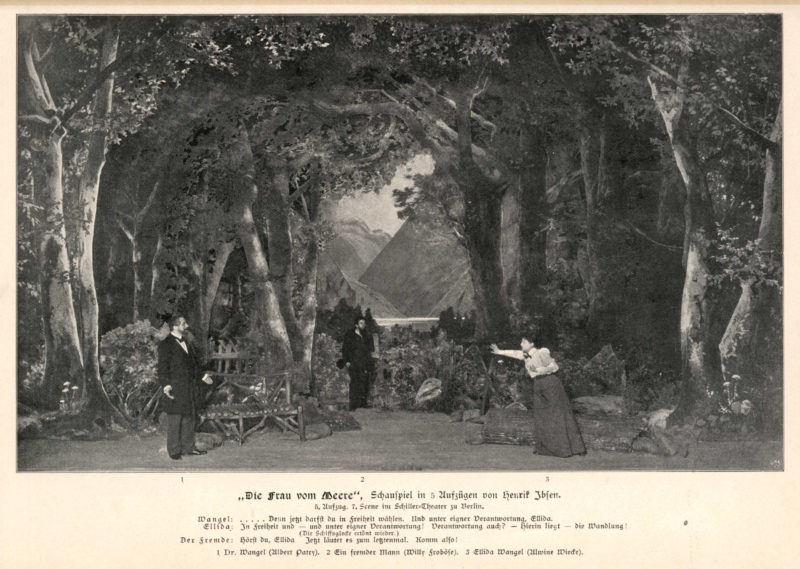 Scene from a 1901 production of THE LADY FROM THE SEA in Berlin.

Ibsen is a figure who led a remarkable life himself. The man who would go on to produce works that are often only outperformed by Shakespeare was born in the Norwegian town of Skien to an opulent household, though this material prosperity disappeared so that the rest of his childhood and part of his adult life was spent in poverty. His natural talent burgeoned in the face of his responses to the social and political occurrences of the time. Events of his own life, such as his political activism, his eventual self-imposed exile, his affairs with younger women, and his eventual marriage to another woman all influenced his plays. The beauty of the Norwegian landscape and local tales also captivated him. His mystique even captured the imagination of artist Edvard Munch, whose paintings hosted subject matter that was markedly influenced by Ibsen’s characters.

Upon its release, The Lady from the Sea was considered less shocking in comparison to Ibsen’s other plays. However, as Ibsen was notable for doing, the play still challenged the state of Norwegian society at the time, focussing on themes other playwrights overlooked, such as marital unfulfillment, the life of an artist, and grappling with stifling social expectations when trying to formulate one’s individual identity. In the modern-day, Ibsen fanatics and the newly-initiated can all recognize Lady as a moving and powerful testament to theatre’s ability to critique and change social norms.

The Lady from the Sea hits Court’s stage February 25, 2022. Learn more and save your seats →