We talked with costume designer Jacqueline Firkins to learn more about her approach to costume design and OEDIPUS REX. The following interview is edited from her responses.

What are the steps of your design process?

I start a design process by reading the play several times. The first time is for an emotional, instinctive response. What sticks with me? How do I feel? What do I think the play can do for an audience, based on how it impacts me? What’s the central story? I take note of all these things. Then I read it again more critically, looking for clues about the playwright’s intent. Are there indications of character relationships that I can help support with costumes? What are the primary themes and symbols? What actions have the greatest theatricality (i.e., those that will be best served by the audio/visual medium of live storytelling)? The third time, I read the play forensically. I note all the information about clothes, including weather, gender, class, and any specific literal or symbolic mentions of personal image/appearance that might directly impact the costume design. This can be as simple as a stage direction of someone checking a watch or putting on a coat, or as abstract as someone being described as birdlike or godlike. Once I have my emotional, intellectual, and forensic notes, I join the team and see where my ideas gel with those of the director and other designers, and where they want to shift with others’ input. Once we have that first group conversation, I head straight for imagery—collecting research pics and sketching out potential ways to apply them. 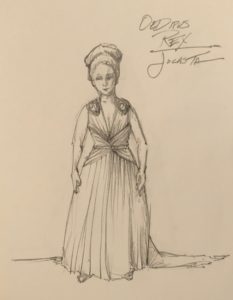 A pencil sketch of one costume idea for Jocasta in OEDIPUS REX.

Did your approach change when starting to think about Oedipus Rex?

I joined the process a little later than usual on Oedipus, so some of the set and lighting ideas were already pretty well established. This gave us a context in which to make further choices. I was able to springboard off the set John created and the team’s prior discussions about ritual and power and the role of the Chorus. One of the things I love about working at Court is that we don’t get shoehorned into our specializations right away. Everyone on the design team helps develop the world and characters and stylistic language. I also love the bridges we form between plays that were written in other times and places and the contemporary Chicago South Side audience. We’re constantly talking about why this play now, here, with this group of artists, for this audience. We want the art to be vital and present. This particular show is also blessed with an amazing team of dramaturgs. They brought in information and inspiration not just about Sophocles but about oracles and riddles, The Great Migration, plague and ritual, Chicago history, and contemporary African American artists. All that played into the production’s look and feel.

What are some of your overarching goals for Oedipus’ costumes?

I want Oedipus, Jocasta, and Creon’s hierarchy to be clear. They each have power, but they’re different kinds of power. I want the Chorus to have the flexibility to function both as a group and as individuals. They need to be part of the space, and then be within the space when the actors take on specific roles. I want the brooches on Jocasta’s dress to feel ominous. They’re Chekhov’s gun. We wait for them to “go off.” I want to create a language that doesn’t set us in a specific time and place. We could be Ancient Greece. We could be 2019 South Side Chicago. We could be in Oedipus’ mind. I also want to establish a look that can be referenced in the remaining parts of the Trilogy. The language and style will no doubt change considerably in The Gospel at Colonus, but it could be useful to see shapes and colors return, tickling the audience’s memory about what came before. 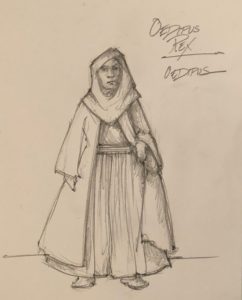 A pencil sketch of one costume idea for Oedipus in OEDIPUS REX.

How much of your work has been informed by the rest of The Oedipus Trilogy?

The short answer: a lot. The longer answer: the set put us in a psychological rather than a literal space. Yes, we’re in front of a palace, but we don’t have doors and pillars and torches. I followed suit with the clothes, stripping away details that might land us in a specific time and place. We also wanted the Chorus to feel not just like they’re in the world, but like they’re of the world, so I looked for clothing shapes that felt architectural, and that matched (or, in a few cases, popped out of) the set’s minimal color palette. Anything that enters this space will get noticed. There’s a power to that. We have to make those choices carefully.

What’s been the most challenging / rewarding aspect of designing costumes for Oedipus?

Challenge: Aside from things like always wanting more time and money, one of the greatest challenges to designing any production of OR is Oedipus’ final return after he’s learned the truth. It’s visceral and brutal. It needs a visual representation. However, modern audiences are inured to stage blood. We know it’s fake. We tell a more interesting, engaging story if we make a unique and symbolic gesture instead. The team developed a lot of different ideas for this until we landed on something everyone could get behind. It’s a choice we won’t really get to test until we have all the elements together in technical rehearsals. I’m looking forward to that!

Reward: This is my 15th season at Court. Over the years, the artists, craftspeople, performers, administrators, and all the other members of the Court community have become my artistic family. I know this is a safe place to take risks. I know I’ll be in a room with immense talent and heart. I know everyone will work their hardest to get an impactful, collaborative story onstage. I don’t live in Chicago anymore. Coming back to work with my family is a dream.

What’s something you wish audience members knew about costume design?

I always feel like if the costumes do their job, you don’t notice them. You get a sense of character and world and relationships. You have the information you need to follow the story. Even when creating a spectacle, that spectacle should feel inherent to the needs of the show. I suspect audiences will notice the clothes in this particular production, particularly with the stronger symbols, shapes, and colors. Hopefully, the response is more emotional than analytical. The brooches feel ominous. The swish of a robe conveys bravado. The loss of a garment signifies another kind of loss. No matter how big the symbols get, the characters should still feel like real people with relatable struggles, allowing the audience key points of identification.