Excerpted from Religion Around Emily Dickinson by W. Clark Gilpin

Act One of William Luce’s The Belle of Amherst concludes with Emily Dickinson reaching a decision. An essay in the Atlantic Monthly for April 1862 had caught her eye and emboldened her to announce her vocation as a poet. Entitled “A Letter to a Young Contributor,” the essay offered advice about writing for publication. Its author, Thomas Wentworth Higginson, was a noted New England abolitionist, Unitarian minister, literary critic, and the colonel of a Union regiment of freed slaves, the First South Carolina Volunteers. Here, declared Dickinson to her sister-in-law and confidant Susan Gilbert Dickinson, was the preceptor who could launch her career:
“I want him to see that I’m different, not just a country poetess sending little verses to the city editor.” She decided to write a letter to Higginson, asking him “to say if my Verse is Alive.” This, of course, required sending some specimen verses.

The fourth and final poem Dickinson selected for inclusion in her letter—recited at length in The Belle of Amherst—challenged nineteenth-century New England’s received wisdom on the human transit from life, to death, to a resurrection from the dead. For eighteen months, from late 1859 to the summer of 1861, Dickinson had wrestled with the poem, which began “Safe in their Alabaster Chambers.” In the course of revision, Dickinson juxtaposed this supernatural progression from time to eternity with images of the natural cycles of time. She puzzled over—but refused to resolve—the transience of all things human.

Her austere verse, in the earliest extant transcription (late 1859), began by meditating on an ornate tomb.

Safe in their Alabaster Chambers –
Untouched by morning
And untouched by noon –
Sleep the meek members of the Resurrection –
Rafter of satin,
And Roof of stone.

The dead were smoothly sealed in a timeless sleep, “untouched” by the passage of days. But deciding on the second stanza to follow this one became a puzzle. Dickinson’s first effort contrasted the timelessness of death with an ephemeral morning, on whose breezes a bee “Babbles” and “the Sweet Birds [sing] in ignorant cadence,” oblivious to the “sagacity” about life’s impermanence that slept nearby in “Alabaster Chambers.” Dickinson sent the poem to her sister-in-law, but, apparently, Susan objected to the second stanza, and Dickinson tried another approach. This time, her second stanza contrasted death’s eternity not simply with an ephemeral summer day but instead with the sweeping circuits of nature and the eclipse of nations. The world of time and change now moved at a dramatically different cadence, and laughing breezes, babbling bees, and piping birds have been replaced by “Soundless” geometry: crescents, arcs, rows, dots, and discs.

Grand go the Years – in the Crescent – above them –
Worlds scoop their Arcs –
And Firmaments – row –
Diadems – drop – and Doges – surrender –
Soundless as dots – on a Disc of Snow. 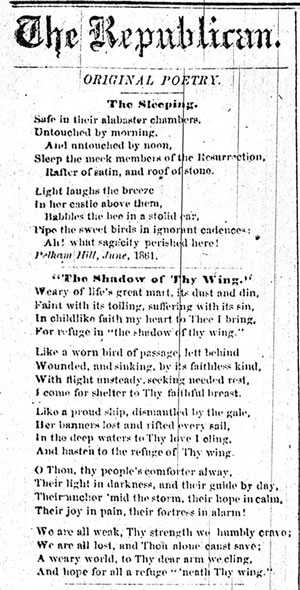 Susan would not relent easily: “I am not suited dear Emily with the second verse … It just occurs to me that the first verse is complete in itself … and can’t be coupled—Strange things always go alone… You never made a peer for that verse, and I guess you[r] kingdom doesn’t hold one—I always go to the fire and get warm after thinking of it, but I never can again.”

But Emily Dickinson remained challenged by the singular stanza she had created. It held death’s meaning within sealed, cool architecture—“Rafter of satin / And Roof of stone”—and she sought the analogy or the contrast that would relate it, in fruitful honesty, to the passages of life. She tried a third version, and sent it to Sue with a query: “Is this frostier?” Dickinson had shifted perspectives, away not only from the light breezes of an ephemeral summer but also from the cosmic horizon of “Arcs” and “Firmaments.” She now focused her attention on reconsidering the “Alabaster Chambers” themselves. Whereas the first two options for a second stanza had contrasted the temporal world with tombs “untouched by noon,” these last two revisions obliquely reintroduced time and change into the crypt itself.

In this third experiment, the first stanza’s architectural images remain, but the smoothly sealed alabaster has been replaced by weather worn windows and doors, stiff and frozen but not, perhaps, impassable. In another intriguing alteration, the silent repose of the dead in stanza one has now become nomadic movement, “Tribes of Eclipse,” whose crypts have been transformed to “Tents of Marble” for a journey that somehow, mysteriously continues the pilgrimage begun in life and time.

Pursuing her experiments during the second half of 1861, Dickinson copied all these stanzas onto a sheet of stationery, adding yet another revisionary stanza.

In this version, the cycles of nature contested one another for possession of the tombs. Spring’s warmth has shaken “the seals” of the chambers, but frost and icicles from “polar Caverns” return to stiffen them into wintery silence. Midnight supplants noon and “Refutes – the Suns.” Although winter and midnight clearly held sway, the poet gave no indication that their contest with spring and sunlight had ended. Here was a poem for Mr. Higginson to ponder. ■

W. Clark Gilpin is the Margaret E. Burton Professor, emeritus, at the University of Chicago Divinity School, where he served as dean from 1990 to 2000, and as director of the Martin Marty Center from 2000 to 2004. Gilpin studies the history of modern Christianity, especially in relation to literature. He adapted this comment on the The Belle of Amherst from his book Religion Around Emily Dickinson (Penn State University Press, 2014), which employs Dickinson’s poetry as a lens through which to view the cultural work performed by religious thought, practice, and imagination in nineteenth-century America. His quotations from “Safe in their Alabaster Chambers” come from The Poems of Emily Dickinson: Variorum Edition, ed. R. W. Franklin, 3 vols. (Cambridge: Harvard University Press, 1998), 1: 159-64.

Photos:
Top: This daguerreotype taken at Mount Holyoke, December 1846 or early 1847 is the only authenticated portrait of Emily Dickinson later than childhood. The original is held by Amherst College Archives and Special Collections.
Right: Dickinson poetry as it was published in the Springfield Republican in 1862.

Posted on November 1, 2017 in Productions