Considered to be Sophocles’ most political play in the Oedipus Trilogy, Antigone was actually written before the other plays, though it takes place last chronologically. First performed around 441 – 442 B.C.E., it still enraptures audiences today with its exploration of pertinent themes like free will and civil disobedience.

The play follows its titular character, the daughter of Oedipus, after the events of Oedipus Rex and Oedipus at Colonus. Antigone finds herself engaged to her cousin Haemon, and her father’s former kingdom now ruled by her uncle Creon. Where Creon was ambiguous in Oedipus, the unexplored sides of his character are brought forth as his tyrannical ways have caused Thebes to once again fall ill. After Oedipus’ sons, Polynices and Eteocles, kill each other in battle, Creon dictates that Eteocles will be given a proper hero’s burial but Polynices will not receive similar treatment. He orders all of Thebes that no one is allowed to perform funeral rites for his nephew, a ruling that Antigone rebels against. She embarks on a quest not for the sake of rebelling, but to honor her beloved brother and stand for her rights rather than mindlessly acquiesce to Creon’s cruel tyranny. 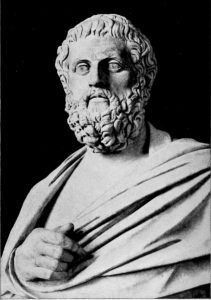 Questions of leadership, free will, civil disobedience, and the cost of wisdom are all explored in this last installment of the trilogy, an addition that furthers Sophocles’ legacy as his plays handle themes that are still relevant today. Creon’s despotic rule is met by Antigone’s steadfast defiance and her refusal to submit ensures she is a character who endures throughout the ages. As is expected for a work by this Greek playwright, the play also contains a thoughtful rumination on the relationship between gods and humans without having any god directly interact with any mortal on stage. Divine law and judicial law clash as Antigone and Creon look to two different paths and must contend with the consequences of their decisions.

At the time this play was first performed, Sophocles was one of the state treasurers in Athens and by then had experience as a general. Such personal life experiences perhaps were factors in his exploration of public and private duty in Antigone. While the impact of personal occupation on his works is conjecture, the struggles in his plays remain relevant to audiences of various backgrounds as they grapple with questions of agency and free will when faced with the pressing influence of social institutions. As for the historical context, the play was written during a period that was bookended by turmoil, from wars to revolts. Some consider the character of Creon to be loosely modeled on Pericles, an Athenian statesman involved in the formation of the Athenian empire. Sophocles interprets and portrays the world around him through the dynamic lens of theatre.