How is Ellida similar to other Ibsenian heroines? Read on to learn about the choice she’s faced with in THE LADY FROM THE SEA and how she navigates society’s gendered confines.

In several of Ibsen’s works, women often play a central role as eventual escapees from stifling domestic lives, a choice that shocked audiences at the time as a scandalous course of action. Famously, the ending of Ibsen’s play A Doll’s House features a woman walking out on her narcissistic husband. This ending was rewritten for the production’s German premiere in the 19th century because it was deemed too controversial. In the modern age amidst a rise of empowering discourse and social movements, the decision to leave a toxic relationship is celebrated, as audiences praise individuals who refuse to let a suffocating relationship determine their destiny. Although the protagonist of The Lady from the Sea takes a slightly different route, she does share select traits with Nora Helmer, her counterpart in A Doll’s House: the desire to regain a measure of autonomy over her own life. For Ellida, doing so still entails marriage, but only when her spouse gives her the freedom to leave or stay, promising to respect her decision either way. The very act of deciding for herself is an empowering opportunity Ellida yearns for and the chance to finally exercise her own volition dominates her consciousness. However, she recognizes the monumental significance of this single decision as the full weight of exercising her free will settles down upon her. She knows she can never return or reverse her final verdict. This innate fear and wonder at the power of a single decision is a deeply human reaction, a dizzying dilemma that is readily identifiable among audiences who must grapple with the similar reality of choice. 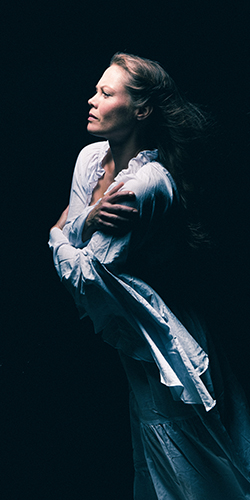 Despite the fear acquainted with choosing one reality and being forced to live with the constant “what if?” of the untread path, Ellida finally and emphatically declares her firm decision. The decision to stay with Wangel frees her from the allure of the alternate as the aspects that made the alternate (the Stranger) so alluring in the first place were adopted by the other choice (Wangel). Although her decision to stay may seem strange as she truly did seem discontent in her domestic situation on the island, it was ultimately still an empowering action for Ellida because it was her decision. She freed herself from the temptation of the Stranger. The Stranger was simply alluring because they presented a level of freedom she did not have in her current marriage. They made her claim responsibility and choose rather than continue floating along in an existence without individual choice and consequences. Once Wangel gives her the freedom to choose and promises to respect her no matter what path she takes, she realizes she would rather stay with Wangel because the primary thing that was so attractive about the Stranger is now an element in her marriage to the doctor. 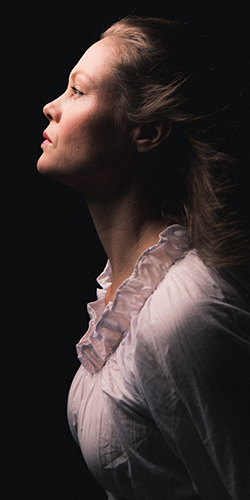 Another aspect that makes her decision surprising is the initial characterization of Ellida. To the islanders, she appears idiosyncratic and eccentric, her deep fascination with the sea and daily swimming rituals marking her from the rest. She appears faintly detached and untamed, only somewhat grounded by emotional bursts of distress once the Stranger reappears in her life. Her connection to the sea acts as both a symbolic escape from a stifling life on land and a paradoxical reflection of her relationship with temptation. Being immersed in the world of the sea allows temporary escape from her reality. The sea can take her anywhere and she connects to the Stranger as she knows they understand that it can never be dominated yet still they follow its call. The sea is everything Ellida wants to have and be: it is freedom in temporary oblivion, the temptation of a new reality, and the ultimate symbol of never being tamed or trapped. Its danger and possibility “attract and terrify” as it serves as a complete alternative to her life on land, an outlet for escape. However, it also acts as a reminder of her situation as well. It symbolizes the limbo state of existence she floats in every day as someone who is never made to confront the consequences of her actions (until the Stranger returns) and who is stuck in place in a domestic situation because her husband constructs her reality with his choices, managing separate lives with her, his daughters, and his work so that she feels unimportant. With her new awareness of her value to others and the power to make her own decisions, Ellida does, in a way, escape from her unsatisfying domestic life by carving out a new reality for herself within an old framework. She stays, but the dynamics within her relationships are markedly changed.

Ellida’s domestic situation and her ultimate choice to stay encapsulates an overarching struggle to define one’s own path and the necessity of balance and free will in any relationship. Whether it is Nora’s choice to leave or Ellida’s choice to stay, both women embark on a path of their own volition, determining what is best for them in each scenario. When Ellida is given the choice between two different lives and when she finally realizes her value, particularly when she realizes she is needed and wanted not only by her husband, but by her stepdaughters as well, she is able to make the decision she feels is right for her. She breaks a promise in the process, but finally seizes the opportunity to shape the course of her own life. The actions of both Ellida and Nora present two entirely different paths, yet both encapsulate the power an individual derives from being able to decide for themselves and seize control over their own life.

We recognize this is only one interpretation of Ibsen’s complex work. There are many to be formed from the text. This is just one we choose to share in anticipation of our production of THE LADY FROM THE SEA. How will you react to Ellida’s choice? See the play for yourself →