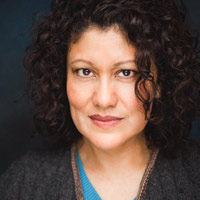 SANDRA MARQUEZ is an actor, director, and educator, as well as a longtime ensemble member and former Associate Artistic Director (1998-2006) of Teatro Vista. She appeared at Court Theatre as Clytemnestra in all three of the Greek Cycle plays: Iphigenia in Aulis, Agamemnon, and Electra. In 2016, she had the honor of joining the ensemble of Steppenwolf Theatre where she most recently appeared in the world premiere of Mary Page Marlowe. As a director, Ms. Marquez’ credits include Teatro Vista’s production of Breakfast, Lunch and Dinner, and the critically acclaimed production of Our Lady of the Underpass by Tanya Saracho. More recently, she directed My Mañana Comes (Chicago premiere, Teatro Vista) and Men on the Verge of Hispanic Breakdown (Pride Films and Plays). As an actor, Ms. Marquez has worked at theatres in Chicago and beyond including Goodman Theatre; Steppenwolf Theatre; Victory Gardens; the Oregon Shakespeare Festival; Madison Repertory; and Second Stage Theatre, Uptown. A proud member of AEA and SAG-AFTRA, her film and TV credits include: The Big Bang Theory, Chicago Code, Boss, Chicago Med, and Timer. She has been a member of the theater faculty at Northwestern University since 1995, where she very much enjoys teaching and mentoring young people.