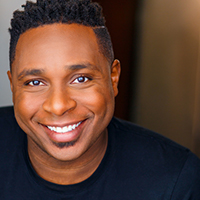 ERIC A. LEWIS is currently appearing in Spamilton, An American Parody. He spent his holidays “under the see” in the ensemble of Disney’s The Little Mermaid at Paramount Theatre, where his previous credits include In the Heights and Tommy. Other Chicago edits: Jimmy Early in Dreamgirls at Porchlight, which earned him a Jeff Award; My Way, Women on the Verge, and All Shook Up at Theatre at the Center; Once Upon a People at Black Ensemble Theater; Parade at BoHo Theatre; and How to Succeed in Business Without Really Trying, Sister Act, and Suessical the Musical at Marriott Theatre. Regional credits include work at Fireside Theatre and a production of Dreamgirls at Milwaukee Rep.