When you come to see a production at Court, the experience is a feast for the eyes, ears, and mind. The Ableson Auditorium transforms with beautiful sets, and the stage fills with actors who perform the play, making you think and feel alongside their characters. You take in the costumes, the lights, the sounds of the world, and are transported into the story. 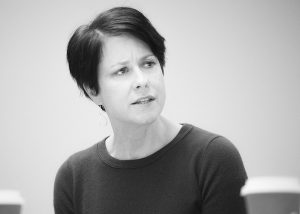 So how does it all happen?
For the actors, that process officially begins at First Rehearsal, the first time they gather in the room to begin to rehearse the play. At Court, First Rehearsals are a special day where the artists (actors and designers), staff, and donors gather together to learn about the play and hear the script read aloud for the first time. It is a tradition that brings together all the people who are critical to making any production happen, from inception to full realization onstage.

From Page to Stage
For many donors, First Rehearsals offer a unique opportunity to be introduced to the play, and to learn about the artistic vision before they encounter the piece on Court’s stage in final form. Longtime donor and subscriber Judith Stein makes a point of always trying to attend First Rehearsal: “I’ve been fascinated by theatre since childhood, and my favorite thing to do was imagine how stories would be told onstage, how certain things would look or where you might stage something.” Attending First Rehearsals gives Judith a glimpse into the artistic vision, piquing her imagination as to what she might see in the final production.

Inside a Designer’s Mind
First Rehearsal can also offer patrons an inside look at how designers’ creativity enhances the world of the show. Before the play is read aloud, the production designers present their concepts for lighting, set, costumes, and sound. Attendees see the initial drawings and models, and then can compare and examine the final products when they see the production onstage.

Judith cites last season’s Man in the Ring as one of her favorite productions. As a world premiere, the play underwent many revisions and changes from First Rehearsal to Opening Night. “The production was extraordinary. To see the changes and growth from the First Rehearsal to the final production, and to see how the ideas evolved during that process, was so special. I felt like I had a better understanding of the many layers and the multi-dimensionality of the play because I had been there at those initial presentations.”

How can you be invited to First Rehearsal events?
Support from donors and patrons like Judith brings the work you see onstage to life, from First Rehearsal to Opening Night and beyond. Don’t miss out! Make a gift of at least $250 today to ensure you receive invitations to the remaining First Rehearsals of the 2017/2018 Season.