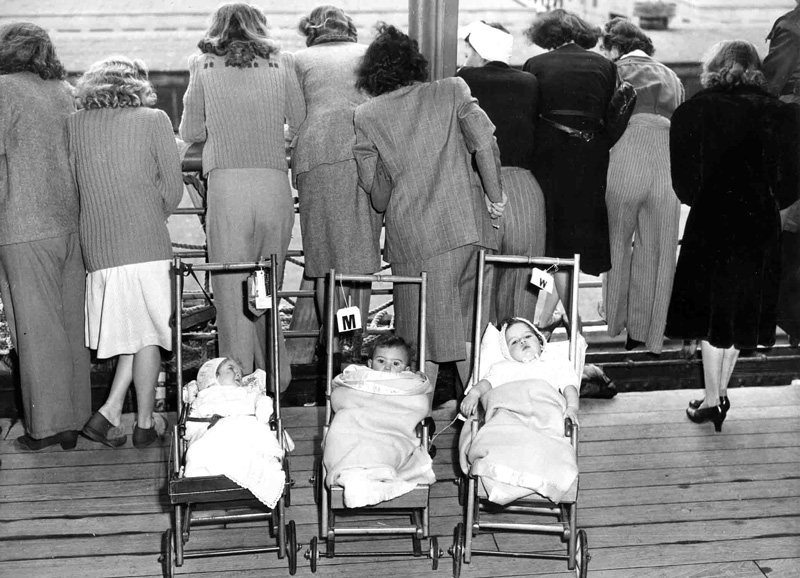 Professor Deborah Nelson, current Chair of the University of Chicago’s Department of English, chats with Resident Dramaturg Nora Titone about Arthur Miller’s All My Sons.

Arthur Miller lifts the curtain on the Kellers as they come to a reckoning with what happened to their family during the war. Peace has arrived, but the characters cannot move forward into the future. What is the impediment?

Essentially, time had been suspended for six years of war—and this suspension of time is a global phenomenon. The conventional markers of time do not operate any more: things like graduating from high school, or having a baby, or your kid starting school, or getting married. Basically, it’s like this vast interruption.

You talk about the clock of normal life being stopped by war. In the play, it seems like some characters are eager to start that clock running again. Kate Keller, though, wants to remain frozen in time, waiting for her son to come home.

A really interesting component of the play is how it shows characters working through different reactions to the war. Kate’s reaction, maybe in some ways, is an index that time has been stopped for so long, that for some people to get it to restart again is going to be very difficult, or it won’t happen at all. A lot of different things are getting worked through, but one of them is, “We have to wake up, we have to process what has happened. We have to stop pretending that we can either stop the clock, or just blithely move on from the war. We have to process this thing.” And that is a very large problem to face. That’s not just the family’s problem. It’s not even just the nation’s problem. In a sense, that’s the world’s problem in 1946.

Miller’s older brother, Kermit, led an infantry unit in France and saw heavy fighting at the Battle of the Bulge. Kermit came back from the war a different person; in addition to his physical injuries, he was heavily affected by post-traumatic stress disorder, or PTSD.

Miller’s brother doesn’t come back, is what happened. Somebody came back, but it was not his brother. And that could actually be another way to think about these ghosts of men who have returned from combat: they actually didn’t ever return, and yet they live with you. There were hundreds of thousands of people who come back with physical injuries, but the mental impact of the things they had seen and done was disabling too. Think about the 19-year-old G.I.s who helped liberate the death camps. When I teach my World War II class, I always remind the students that those soldiers were their own age. This is the end of the war, the soldiers were young, and they walk into Buchenwald.

What literary aspect of this play draws you in the most?

It’s the women in the play, because they are, in some sense, a potent absence. It’s not really their story, but there’s so much to be said and thought about them. At Ann’s first entrance, and through that whole scene, every single character will comment on her looks—her beauty, her robustness, her vitality. In some respect, she’s like a pinup girl. It’s so striking, it’s like Rita Hayworth has just walked in the door!

You learn she’s been living in New York, but who knows what she’s been doing? You have to assume she is working, and there’s something about her manner that suggests that she had a professional life. But the fact that we don’t have to care about that part of her at all is really interesting! The Keller family has known her forever, but are they focusing on the surface so as not to trouble the depths? Because they are all worried that the things they don’t want to talk about are now going to be talked about?

One of the things we know related to Ann is that women had to enter the workforce for the war effort because most of the men were mobilized. But when the men came back home, they needed to be re-employed. Women were ushered out of the workplace, and there was a reorientation to the home and childbearing. In many ways this is where the feminist movement will be born, when people realized—as Betty Friedan wrote in The Feminine Mystique—that the women who moved into the private family spaces of the American suburbs were being asked to be figures of sacrifice for the children and for the husband.

Miller sets the play in a suburb He wanted the action to seem as if it could unfold in any home in any neighborhood in any part of the country. You have worked on the question of privacy in post-war America: what does a suburb signify for you?

1946 is not yet the age of the suburbs. Suburbs exist, but the massification of their scale has not arrived. We’re at the dawn of the trend. So Miller is drafting off of a fantasy that’s being advertised to returning G.I.s, but hasn’t been built yet. With this play we already have the suburb in place as the fantasy space of post-war America. It is fantasized as a place of withdrawal, privacy, and healing. The Kellers live in an enclosed space. Obviously, the space is penetrable because the neighbors are always walking in and out, but there are poplars planted around the Keller home; it’s hidden from sight. The suburb is a fantasy space, but as we see in the play, there are secrets and pain and loss in this space that very much have to do with reality. It is a place where people are recovering from fifteen years of family dislocation, deprivation, death, and loss. Families were broken apart during the Great Depression, and they were broken apart during the war, so a lot of pressure is being put on private space to remedy these things. Why did the private home and the private family become the touchstone of the post-war period? Many of the reasons may be seen in the play. ■

Deborah Nelson works on late 20th-century literature and culture. Her book Tough Enough: Arbus, Arendt, Didion, McCarthy, Sontag, Weil was published by the University of Chicago Press in 2017. She is also the author of Pursuing Privacy in Cold War America. She recently led a Mellon-funded Sawyer Seminar called “@1948” and edited a special issue of Critical Inquiry devoted to mid-century literature and culture. She is a founding member of Post45, a collective at Stanford University Press that publishes an online journal and a book series.

Photo: This 1945 photo shows a group of Army wives anxiously waiting to catch a glimpse of their returning husbands (National Park Service, U.S. Department of the Interior).