Richard Strier is Frank L. Sulzberger Distinguished Service Professor Emeritus in English Language & Literature at the University of Chicago, where he has taught since 1973. Court Theatre intern Emily Lynch had the opportunity to talk to him about Emily Dickinson’s enigmatic life and extraordinary writing.

To what extent was Emily Dickinson, in fact, “Nobody”?

One of the astonishing things in her publication history is that the poems came out through a friend of the family in the 1890s and in very edited forms. Gradually—and it took a while—she was starting to be recognized as a major poet. Now, there’s a whole scholarly industry of Dickinson.

What do you mean by scary?

She is—and I think she knew this—preternaturally intelligent, and also very much in her own world of concepts and terms. She, like many other incredibly talented people, knew she was incredibly talented. I think she’d be delighted, but not surprised, that there’s a journal studying her work, that she’s in every anthology, and that scholars all over the world are studying her poetry. She would think, “Yeah, that seems about right!” 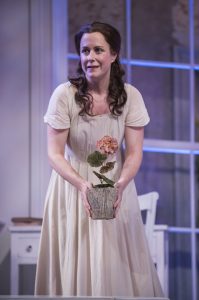 Why do you think Dickinson’s personal life receives as much—if not more—attention than her poetry?

The poetry is so difficult, so people are reaching out for interpretive keys. The poetry also seems to be referring to things that happened, seems to refer to an event. There’s this love poetry, some of which is fairly sexy, and so readers immediately think, “Did she have an affair? Who was it with?” She then has these letters to someone she addresses as her “master,” and so we ask, “Who was her master?”

I think all of this is irrelevant. We just don’t know. There’s a whole industry of finding biography in her poetry, but it takes away the idea of imagination. To think a human being needs to have had sexual relationships to be able to imagine what one might be like seems like a pretty impoverished sense of what the imagination can do.

But I think this is partly because the poetry is so convincing. You think, “No, this must be about a real event.” And the other reason is that it’s just so difficult.

How can knowledge of her life be misused in interpreting her poems? Do you think she uses narrators other than herself in her poetry?

How did her poetry differ from that of her contemporaries?

It was more abstract, more discontinuous in syntax. It’s just not like anyone else’s poetry in terms of the powerful use of abstraction.

The manuscripts were without normal punctuation and just had a lot of dashes. You know, the nineteenth century loved dashes, so she’s not unusual in that, but she is unusual in practically not using any other punctuation. You often don’t know where a sentence begins and ends.

In the first editions of her poetry, they punctuated it. The editor would say, “Here’s where the sentence ends,” and he’d make a decision. Nowadays, we don’t do that anymore, which makes the poems much harder to read. In order to make sense of them, we have to decide, “Where one thought end and the next begin?” But she doesn’t help you with that.

Why does Dickinson continue to capture readers’ attention today?

The quality of her writing is just so high. It’s so extraordinary and interesting and powerful that once you know about it, it’s hard to ignore.