When Guess Who’s Coming to Dinner premiered in 1967, interracial marriage was still outlawed in thirteen states. Less than 20 percent of the population approved of marriages “between white and colored people.” Marketing executives feared that few white filmgoers would even see a film with a black lead. However, in the face of widespread institutionalized bigotry, Stanley Kramer’s film was an immediate box office hit. 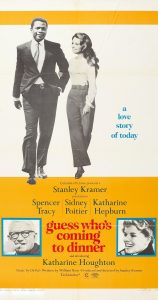 Despite the film’s commercial success, and despite undeniable racial prejudices throughout the country, many liberal critics found Guess Who’s Coming to Dinner to be overly-polite, even dated. In his review for Life magazine, critic Richard Schickel stated, “Kramer is earnestly preaching away on matters that have long since ceased to be true issues.”

Many critics took issue with the characterization of the film’s hero, Dr. John Prentice. Played by Sidney Poitier, one of Hollywood’s first black movie stars, Prentice was, for many viewers, too perfect. After all, a handsome, respectful, Johns Hopkins-and-Yale-trained doctor fighting tropical disease is unparalleled fiancé material by almost all parents’ account. Prentice’s perfection worked to placate white audiences while skewing reality for black audiences.

Unfortunately, this flagrant disparity between reality and media representation has persisted long past 1967. Media depiction of interracial couples has grown on television, owing to shows like Black-ish, Modern Family, and Scandal, but mixed couples in film remain rare. Although we have moved past times of the Motion Picture Production Code, which attempted to instill particular moral values in audiences, and although the census has found record rates of mixed marriages and relationships, few of these couples make it to the screen.

According to Kevin Noble Maillard, co-editor of the essay collection Loving v. Virginia in a Post-Racial World, “Interracial love is the complicated, unacknowledged silence of the American past. The overwhelming lack of these stories onscreen reveals a tacit cinematic apartheid that insists upon racial separation.” As original critics of Guess Who’s Coming to Dinner noted, interracial couples existed long before 1967. Yet even in contemporary film, these couples scarcely exist in their own universal right.

Mallard continues: “The absence of these accounts wordlessly validates the impossibility of integration at the most intimate, personal level. It is the duty of film and art to fill these narrative voids.”