August Wilson’s Two Trains Running is the seventh installment in his ten-part Century Cycle (also called the Pittsburgh Cycle). Set in the Hill District of Pittsburgh, at the height of the civil rights movement, a group of weary individuals downtrodden by infuriating social situations face an era of intense change. The Hill District was once a bustling, prosperous community, but was hit hard by significant economic decline in the 1960s.

Within the play, seven characters engage in everyday dialogue about the political events of the time and recent events in the surrounding area, with particular attention given to the diner and the funeral parlor next door. Set in 1969, the play takes place during the rise of the Black Power Movement in the United States. Just a year before the play is set, Martin Luther King, Jr was assassinated and President Lyndon Johnson signed the second Civil Rights Act. Despite legal achievements, African Americans still did not experience the same rights or receive equal pay as whites. By thoughtfully examining the reactions of everyday citizens to the tumultuous changes of the time period, Wilson recontextualizes the history of the age on a more personal, nuanced level as he explores its effects on the often ignored individual. 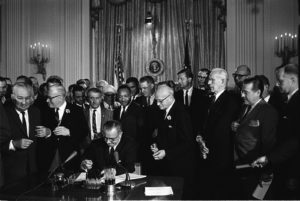 With respect to the hopes of the only female character in the play, the Civil Rights struggle had additional battles as well when it came to securing rights for black women. In 1969, activist Ella Baker gave a speech at the Institute of the Black World in Atlanta, throughout which she argued women formed the backbone of the movement. She also decried the idea that women were only background fixtures whose only purpose was to support the ego of men. Black feminist groups rose more prominently in the 1970s.

Originally performed at Yale Repertory Theatre in 1990, Two Trains Running premiered on Broadway in 1992, starring the likes of Laurence Fishburne, who won a Tony for his performance as Sterling, and Samuel L. Jackson. Wilson’s work was praised and won numerous awards, including the American Theatre Critics Award.