“In his radically revised production of “Desire Under the Elms,” Walter Dallas has … injected an interesting note of racial complexity by casting both Abbie and Eben with African-American actors, while the rest of this singularly dysfunctional family is white. This resonant idea is itself sufficient to make the production intriguing…” -Variety

“a red-hot revival … It’s a hot-blooded, plot-heavy drama that pulses with burning energy … grippingly acted … Caroline Clay’s driven Abbie and Donavin Dain Scott’s tormented Eben come together in one of the most erotically charged love scenes I’ve ever seen on a Chicago stage” -Reader

“Dallas and his pitch-perfect cast present O’Neill the way he is meant to be done: with intelligence and craft and a touch of inspiration.” -Daily Herald

Vehement family dissension has enveloped the Cabot farm for years. When young Eben Cabot is forced to compete with his new stepmother, Abbie, for impending possession of the family farm, the discord intensifies. Then Eben’s ardent loathing for Abbie unexpectedly turns to heated passion and love. Doomed from the beginning, not even the serene beauty and peace of the land can calm the storm that surrounds Eben and Abbie’s tortured affair.

Co-produced with Philadelphia’s Freedom Theatre (one of the leading professional African-American theatres in the country) Desire Under the Elms was directed by Freedom’s Artistic Director, Walter Dallas, and moved to Philadelphia following its Chicago run. Mr. Dallas transported the action of the play from New England in 1850 to 1930’s Georgia for a Southern and multicultural exploration of O’Neill’s classic. 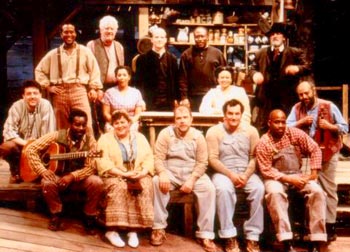