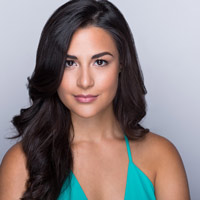 STEPHANIE ANDREA BARRON made her professional stage debut with Court Theatre in Iphigenia in Aulis. She performed in world premiere productions of The Burials at Steppenwolf Theatre and Another Word for Beauty at The Goodman Theatre. She graduated from DePaul University with a BFA in Acting from The Theatre School as well as a degree in Psychology. Some of her favorite roles at The Theatre School were Ophelia in The Hamlet Project and Fabiana Cunningham in The Last Days of Judas Iscariot. While at DePaul, she received certification in five different weapons from The Society of American Fight Directors.  Stephanie’s work can be seen in feature films and NBC’s Chicago Fire. Stephanie is represented by Gray Talent.