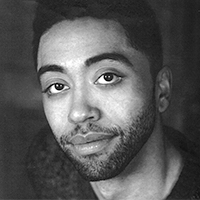 RASHAAD HALL is an actor, teaching artist, poet, and performance artist in Chicago. Since graduating from DePaul’s BFA program in 2010, he has worked at  Goodman Theatre, The Hypocrites, Steppenwolf, Victory Gardens, Chicago Slam Works, and Black Ensemble Theatre, among others. Recently, he was nominated for a Joseph Jefferson award with the cast of The Hairy Ape by Eugene O’Neil. Film credits include his guest starring role on Brown Girls, a web series premiering in 2017. He is a company member of For Youth Inquiry, providing sexual health and wellness forum theatre to students across Chicago with Illinois Caucus for Adolescent Health. He is proudly represented by Paonessa Talent Agency.