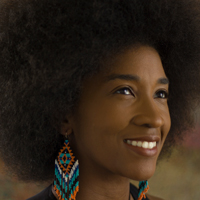 MELODY ANGEL was recently named one of 2018’s HOT New Faces of Chicago Theatre by Chris Jones at the Chicago Tribune. She made her theatre debut at Goodman Theatre in the highly rated production of Father Comes Home From the Wars by Pulitzer Prize-winner Suzan-Lori Parks. Melody’s performance led her to star in the short film Knockout by Alley Cake Films, for the 48 Hour Film Project (Chicago). This short film went on to win best film, and will now be a part of the International Film Festival Filmapalooza 2019. Melody Angel is also a singer/songwriter/guitarist, who has performed all over the world with her “Blues-Rock-Soul.” and her second self-titled album will be available on her at www.melodyangelmusic.com.