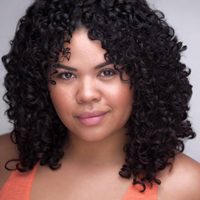 MELISSA DUPREY is an actor, stand-up comic, activist, playwright, and musician from Humboldt Park, Chicago. She has 4 critically acclaimed solo shows (SEXomedy, SUSHI-frito, SEXomedy 2.0, Good Grief) and will be debuting a new piece, Rise of Thunderdome, Spring of 2021 through the Off-Broadway incubator program at Ars Nova. Her full-length play, Brujuja, was an official selection of 16th Street’s 2019 Pop Up Reading Series and is slated to premiere in 2021 with UrbanTheater Company, her artistic home where she is an ensemble member. She was a new talent for the 2014 ABC Diversity Showcase in NYC. She is featured in the Emmy-nominated web series, “Brown Girls,” in development with HBO. She has multiple credits in TV and Film, currently recurring in Grey’s Anatomy on ABC. She has been seen at The Goodman, Steppenwolf, Victory Gardens, Free Street Theater, and is honored to be returning to Court Theatre for Theater for One.