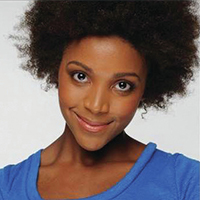 JADE WHEELER is ecstatic to return to this role of Cat in The Originalist following productions at Pasadena Playhouse and Asolo Repertory. Jade has performed extensively along the east coast from Massachusetts to Florida. Most recently she appeared in The Legend of Georgia McBride at GableStage. Her one-woman show Who is Eartha Mae? played Off-Broadway at the 2016 United Solo Fest and won for Best Cabaret. Local credits include Debbie Allen’s Alex in Wonderland and Lost in the Stars (the Kennedy Center); An Octoroon(Woolly Mammoth); The Two Gentlemen of Verona (Shakespeare Theatre Company); and Ruined (Everyman Theatre). Regional credits include GableStage, Central Square Theatre and Stoneham Theatre. She received her B.A. in theater and French from George Mason University and additional training from La Ferme de Trielle and The Actors Space. Visit jadewheeleractor.wixsite.com/home.