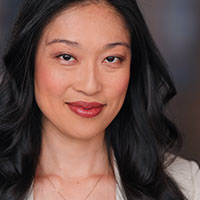 Helen Joo Lee Most recently, Helen was seen in Murder in the Orient Express and The Great Leap (Asolo Repertory Theatre). Her Chicago credits include Kentucky (The Gift Theatre), In the Canyon (Jackalope Theatre), American Hwangap (A-Squared/Halcyon Theatres), and as a permanent replacement in Fantastic Super Great Nation Numero Uno (The Second City’s e.t.c. Stage). You can catch her on-screen in Black Lightning (CW), The Chi (Showtime), Empire (FOX), Chicago Med (NBC). Many thanks to her agents at Stewart Talent! She has lived in Seoul, Melbourne, and Rome.
Bio as of 8/2021.