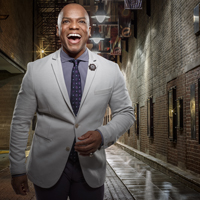 DARRIAN FORD is a Chicago native. He began his professional theater career at age 13 in Oscar Brown Jr’s The Great Nitty Gritty. At 15 he joined The Joseph Holmes Chicago Dance Theater and at 19 moved to NYC to dance in the companies of Alvin Ailey and Donald Byrd/The Group. He made his Broadway debut as Charlie in Rodgers & Hammerstein’s State Fair, about which the New York Times said “…note the expert dancing of the irrepressibly comic Darrian Ford.” He also appeared in The Who’s Tommy (B’way/First National), Smokey Joe’s Cafe (First National) for which he won The Black Theater Alliance Award for Best Actor in a Musical, and the First National tour of The Color Purple. Darrian co-starred opposite Halle Berry in HBO’s Introducing Dorothy Dandridge as Fayard Nicholas of the legendary Nicholas Brothers and recurred on Disney’s That’s So Raven. In addition to a dozen appearances on daytime talk shows as musical guest, he has been featured on several of his Broadway colleagues’ albums, original workshop recordings and concept albums. As a singer and songwriter, he has collaborated with some industry staples like Allan Rich, Baby Boy, Robbie Buchannon and Bill Esses, who co-produced Ford’s CD, Everything. Since it’s 2006 debut in NYC, Darrian continues to tour and perform his original concept concert, The Cooke Book- The Music Of Sam Cooke, around the country. In January 2018, he will release his first full length album The New Standard.