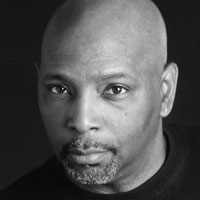 DAVID ALAN ANDERSON made his Court Theatre debut as Dr. Martin Luther King, Jr. in The Mountaintop, for which he received a Jeff nomination, and also appeared in Gem of the Ocean. He is a 2013 recipient of the prestigious Lunt-Fontanne Fellowship, sponsored by the Ten Chimneys Foundation. He is a frequent performer with Indiana Repertory Theatre, where his many credits include What I Learned in Paris, the title role in The Giver, The Whipping Man, Radio Golf, Romeo and Juliet, The Heavens are Hung in Black, A Christmas Carol, the title role in Julius Caesar, and the one-man show Looking Over the President’s Shoulder. He is a company member with the critically acclaimed Penumbra Theatre in St. Paul, MN, where his credits include King Hedley II, Seven Guitars, Two Trains Running, and Jitney. Selected regional credits include Troy in Fences at Denver Center; Walter Lee in A Raisin in the Sun at the Guthrie, Penumbra Theatre, Cleveland Playhouse, Arizona Theatre Co., and Kansas City Rep; Othello at Great Lakes Theatre and Idaho Shakespeare Festival; Kent in King Lear and Othello at Pennsylvania Shakespeare; and Sebastian in The Tempest at Actors Theatre of Louisville. He is represented by Paonessa Talent Agency.