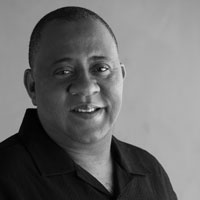 BARRY SHABAKA HENLEY starred as Louis Armstrong in Court’s production of Satchmo at the Waldorf. Feature films credits include Collateral, Miami Vice, The Terminal, Ali, How Stella Got Her Groove Back, Devil In A Blue Dress, and many others. Television credits include Flash Forward, Michael Mann’s Robbery Homicide Division, and HBO’s Luck. He has guest-starred on NYPD Blue, Law & Order, Shameless, Veep, and many more. Henley spent 8 years as host and producer for a local NPR station in San Francisco. He appeared in August Wilson’s award-winning production of Jitney, winning an Obie, Drama Desk, Outer Critics, and the 2001/02 Olivier Award for best play. He has also appeared at The Taper Two in Joe Chakin’s production of Waiting for Godot and Robert Egan’s Richard II. He was in the company of actors at the Los Angeles Theatre Center, where he founded and was director of the Black Theatre Artists Workshop. He was the award-winning director of LATC’s production of Leslie Lee’s Rabbit Foot featuring Loretta Divine and Keb Mo. He is the writer and performer of the stage play Jungle Bells, which has played Los Angeles, San Francisco,  East Berlin, and a critically acclaimed run at the Hackney Empire in East London. Henley has toured the globe as a company member of The San Francisco Mime Troupe. He was the writer and star of Mingus Remixed, which premiered at the Lorraine Hansberry Theatre in San Francisco.